Why did you decide to curate a pride catalogue?

Here at Hopster, we’re on a mission to help kids learn through the stories they love. We believe in curating content that’s fun, educational and reflects a more gender-neutral tone, that is inclusive and representative of all backgrounds. We have hand-picked content that celebrates individuality and showcases differences in the world. Where there’s a lack of what we feel is important content – we aim to commission it ourselves.

Minority communities are underrepresented in preschool TV and that includes LGBT+ families. At Hopster we want to change this and bring positive LGBT+ characters to the screen. We have put together a Pride-themed area with LGBT+ original and acquired tv shows, songs, and books.

Love is Love is an original animated song from Hopster Studios, this wonderfully colourful animated video that celebrates love and all the colours of the rainbow and reflects modern day families and relationships.

Family Question Time is an original animated mini-documentary which offers a snapshot of real-life families being silly and talking about their lives.

The true story of a young girl named Stella who is uncomfortable as a female and finds the confidence to be a boy named Stuart. This positive story, is about being true to yourself and finding the confidence to trust and find acceptance in your friends and family.

Based on a true and heartwarming story about a boy called James and how he finds happiness in his new home with his newly adopted parents Peter, James and Einstein the cat.

This is an empowering true story of how Lydnsey overcame bullying/teasing at school to become a doctor, and marry the love of her life, a girl called Holly. 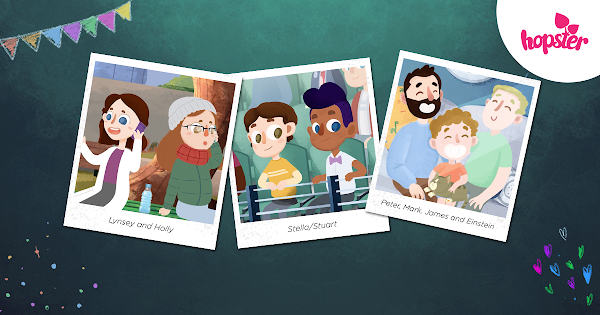 We have acquired a number of highly regarded LGBT+ ebooks and short films that range from heartwarming family experiences to exciting fairytales.

In this collection of videos, Olly Pike explores a range LGBT+ topics for kids. His mission is to combat discrimination – and encourage acceptance in regards to love, kindness and respect.

An inspiring song that is about staying true to yourself.

A Pro-Gay family fairytale. The King and Queen think it’s time for their son to choose someone to marry and spend his life with, but are they surprised by who he chooses? Watch and find out!

Goldilocks is out meeting all the different families in the village, but what is she delivering to them?

A story about pride and always being yourself. Join Christopher, or as he is better known as ‘Little Red Riding Dude’, as he journeys to his Grandmas house – but who will he meet along the way?

The Bravest Knight Who Ever Lived

Follow the story of Cedric as he becomes a full-fledged knight and finds the love of his life. This tale portrays positive LGBT characters in an age-appropriate and heartwarming way, encouraging children to stay true to themselves.

Discover a fairy tale based on the tale of Red Riding Hood but with a twist. This heart-warming preschool animation challenges traditional gender stereotypes and aims to encourage kids to be accepting and dare to be who they want to be.

The Girl with Two Dads (eBook)

Matilda is a new girl at Pearl’s school, but there’s something really different and cool about her family – she has TWO dads! Pearl is sure that Matilda’s family must be very different to her own but, as they become friends, she starts to discover that maybe Matilda’s family aren’t so different after all…

Julian is a Mermaid (eBook)

While riding the subway home with his Nana one day, Julian notices three women spectacularly dressed up. Their hair billows in brilliant hues, their dresses end in fishtails, and their joy fills the train carriage. When Julian gets home, daydreaming of the magic he’s seen, all he can think about is dressing up just like the ladies and making his own fabulous mermaid costume. But what will Nana think about the mess he makes – and even more importantly – what will she think about how Julian sees himself?

Why do you think it’s important for preschoolers to be informed/educated about LGBT+ issues?

Our aim is to encourage kids to nurture inclusion in the next generation and prevent homophobic, biphobic, and transphobic bullying. We want content that teaches kids about different types of families, challenges stereotypes, and reflects the modern world. Children are not born prejudiced, it is learned behaviour. We believe that children who learn from an early age about positive LGBT+ stories will be able to nurture inclusion and combat discrimination & bias.

Why did you decide to partner with Diversity Role Models (DRM)?

Diversity Role Models are a UK LGBT+ education charity that actively seeks to nurture inclusion and empathy in the next generation by working with schools to make them more inclusive. Their aim is to stop bullying before it happens, by educating all young people about differences in sexuality & gender identity.  Collaborating on an LGBT+ initiative with DRM is a perfect partnership as our brand values and their expertise and active outreach with children of all ages

What process did you follow to make this ‘age-appropriate’?

We worked closely with our Head of Learning, who has 15 years experience in teaching, across Early Years, Key Stage 1 and 2 and as an Assistant Headteacher. We also worked closely with a preschool writer to make sure that the language and themes were age-appropriate.  Diversity Role Models also ensured that the stories translated appropriately from real-life to animated preschool shows.

All of our content is about family, friendship, love, acceptance, personal choice, and finding happiness. We do not use terminologies nor do not address the topic of sex or sexuality – because we know that this could be confusing for preschoolers.

Did you have any experts working on this project?

We worked closely with our Head of Learning, who has 15 years experience in teaching, across Early Years, Key Stage 1 and 2 and as an Assistant Headteacher. We also worked closely with a preschool writer to make sure that the language and themes were age-appropriate.  Diversity Role Models also ensured that the stories translated appropriately from real-life to animated preschool shows.